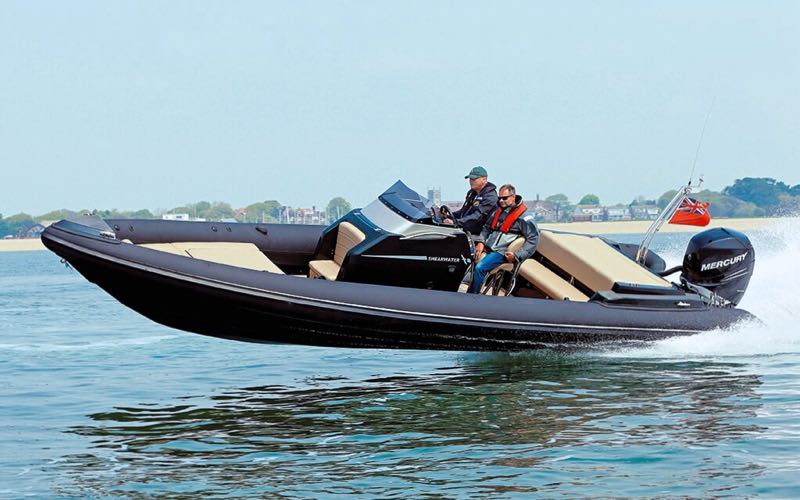 Greg Copp tests the Shearwater 890S and finds a high-performance craft that is exciting to drive but is also well suited to family days out and is thus likely appeal to a large proportion of the boating fraternity.

The beauty of what I often refer to as a ‘Super RIB’ is its ability to rapidly soak up sea miles with virtually effortless ease. There have been many contenders in this area, but the Shearwater 890S is a boat that picks up where sadly some past iconic brands left off. Costing has always been an issue when building big RIBs as performance, handling and seakeeping don’t come cheap, and there are limits to how much someone will pay for an open boat with inflatable tubes.

Shearwater have achieved a near perfect balance here. This is not to imply that any corners have been cut, as the moment you step aboard, the attention to detail and the high-quality finish are obvious – not least the costly Orca tubes. This quality/cost balance is achieved by the complete fitted hull being built in Greece. This enables the whole process – from laying up to upholstery and stainless work – to be finished in-house, and at cost-effective rates. When the boat reaches Shearwater in Bembridge, the only thing left to do is fit and rig the engine.

The wrap-around twin-seat design is as impressive in appearance as it is in functionality. These gas-damped seats are built to take a hammering when seated, and if things get really rough, at the flick of a catch they quickly convert to enclosed leaning posts, and vice versa. The 8mm real-teak decking is precisely laid, the upholstery impeccably finished and the stainless fittings from the hidden aft fuel filler to the flag staff are perfectly crafted. The console arrangement is rightly designed around the helmsman, with a central 12″ Simrad plotter under your line of sight flanked by VHF, SonicHub hi-fi and a speed log/repeater. The design is such that the wheel can be mounted either port or starboard.

This demo boat was fitted with a 300hp Mercury Verado, which is a perfect match for the boat. Slipping out into the oily calm waters of the Solent, the boat was hitting 30 knots quicker than you can realistically time. Just 5 degrees of trim has her perfectly poised for any speed from 30 knots to wide-open throttle at 47 knots, which with the silky smooth Verado is deceptive. This boat has the optional jack plate enabling you to lift the engine, reducing drag caused by the outboard leg. With the engine lifted the boat will hit 52 knots, depending on conditions. The jack plate has a conveniently positioned LED gauge keeping you informed of engine height should you forget to drop the motor down when you throttle back. The rule of thumb here is 3.5 for normal running and anything up to 5 degrees for those last few manic knots.

Cutting around the photo boat, the 890S proved remarkably quick in the turns. The hull has perfect fore and aft balance, keeping enough of the centre line in the water to maintain a grip, while being able to quickly flip across on the other lock when needed. In hard full-lock turns the deep-vee hull makes itself felt as the boat banks over to a point when the tubes really start earning their crust – not something to practise with the family, and I did get the impression that you could overcook it here, but then this was a case of horsepower-induced enthusiasm. You can certainly feel the low-down grunt of the supercharged Verado when punching out of turns. These engines never fail to impress me with their spread of power, especially when you consider they are based on a 2.6L block, which says much for the advantages of mechanical forced induction.

The fuel figures on the day tend to support Mercury’s claims of efficiency for the Verado. At 15 knots, which is just over the hump for the 890S, we recorded 2.62mpg, improving to 2.95mpg with the boat planing properly at 21 knots and the motor spinning at 3500rpm. From this point the fuel consumption curve levels out: with 4000rpm at 27 knots returning 3.29mpg, 4500rpm producing 34 knots returning 3.03mpg, and 40 knots at 5000rpm producing a respectable 2.91mpg. Above what is a 13-knot sweet spot, the supercharged thirst kicks in, as at wide-open throttle with the jack plate at 3.5 degrees consumption drops to 1.92mpg at 47 knots/6000rpm. Though we did not record figures with the jack plate raised, fuel efficiency will certainly improve above 40 knots if you bring the engine up to around the 5 mark on the jack plate meter. All readings were courtesy of the factory-fitted fuel meter.

With the sea so calm it was a case of wake hunting to get a real feel for the sharpness of the hull. Luckily we got a chance from a passing Botnia Targa 35, whose wake was easy work for the sharp hull forefoot as the boat easily cut through it at 40 knots. Unlike some sport RIBs built with forward tapered tubes, the 890S and its sister the 890C have slightly raised bows. It might not quite be in the style of a Tornado or Delta, but it will be a bonus running into head seas, especially as the most forward point of the bow is strengthened with a GRP storage compartment just behind the tip of the tubes.

From a family perspective, there is a full-beam bench seat complemented by a sun pad and large bathing platform. In the bow sits a deep locker under the forward cushion, neatly internally finished. Under the sun pad there is a huge stowage area capable of swallowing a mountain of water sporting kit. The reason this outboard-powered boat is so generous in this department is that Shearwater offer this boat with either 260hp or 370hp MerCruiser diesel sterndrives. These Audi-based engines driving through Bravo 3 drives will add a different dimension to this boat, especially with its 380L fuel capacity. Alternatively you can spec the boat with pretty much any brand of outboard – or if you really want to release the boat’s full potential it is now being offered with the latest 350hp and 400hp Verados.

The Shearwater 890S is a great rival to the mainstream brands of big sports RIBs/superyacht tenders available in this country. It has much going for it, not least price and build quality. However, its main appeal is its uncompromising character, which makes it such an exciting drive. Not many RIBs are so performance focused, and in being so, the 890S does not lack in those crucial features essential for any fast offshore boat. It also has a sensible side for those family days out, which, coupled to its striking looks, should make it appeal to a wide range of the boating fraternity.