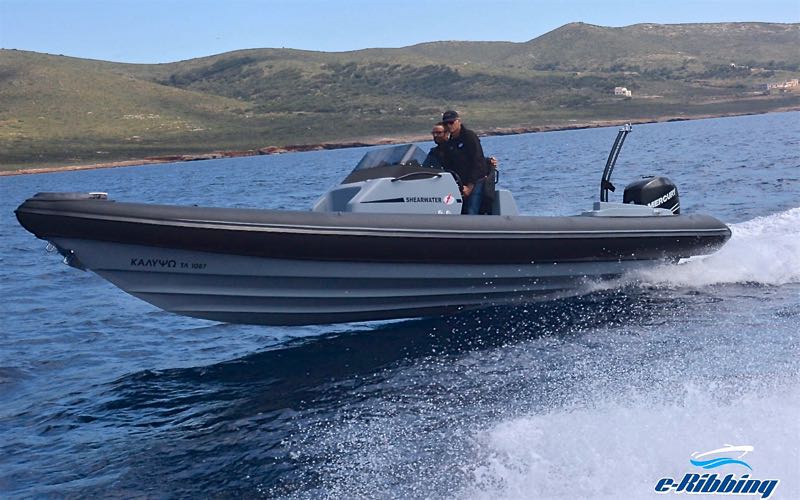 Although there are hundreds of times I have been behind the Shearwater’s steering wheel, every time I come to the same conclusion: it’s extremely friendly to the user and really, incredibly enjoyable driving it!

It is very difficult to accept that a Rib can touch perfection. But when carefully observing even the smallest detail, I can definitely say that Shearwater has reached an enviable level of construction, ergonomics and functionality that I really do not know if there is any room for further improvement.The restless spirit and the inexhaustible passion for perfection that characterizes the owner of the next-boats company and Shearwater’s manufacturer, lead him every time to improve details that even only an experienced eye could observe. Using the best materials in the market, both for the construction and the equipment of the boat, has managed to present a beautiful and at the same time luxurious product, which at least can make us proud.

Shearwater 860 S is a pure open-Rib with excellent finishing, completely safe and seaworthy, which combined with its impressively dry and soft ride as well as its exceptional performance is entitled to flirt with the top of its class.

Its hull carries all the elements that make it behave very well in rough waters, ending into a «clean» V at the transom area where it measures a 24-degrees of deadrise offering extremely soft ride.

On each side, we can see a relatively high chine with a clear negative inclination as well as two spray rails, the lower of which stops far away from the transom, allowing thus the bow to stand up so as to face successfully the high waves.

The deck is characterized by the finely finished gray gel coat that is combined brilliantly with the beautiful colour combinations of the tubes and the redesigned console, which is no doubt the strongest and most attractive spot. Painted with a specialized technique in a black matte colour that takes off the aesthetics, it is elegant and completely ergonomic, built on many levels offering direct inspection of the instruments either when we seated or when in a semi-standing position.

It is centrally located, leaving two very comfortable passageways to its port and starboard, which with a width of 30 cm allow the passengers to move easily towards the bow and vice versa.
To the port of the console is the steering wheel ideally suited for restful driving and just above it the GPS is located. Centrally positioned are the electric switches, and to the right the VHF and the USB ports for charging electronic devices.
On the left and right side of the lower level of the console are the stainless steel cup-holders for the driver and co-driver, which are self-draining, leading the water with two thin tubes starting from their bottom on the deck.
Outside of them, the particularly elegant handles stand out, designed by the manufacturer itself and made of stainless steel painted in a special black matte colour.

Beneath the wheel we come across a large reclining glovebox while the footrest is configured to provide access to the tank and to be an ideal little storage space for the bow lines.

Inside the console a huge storage space is formed, accessible from its front part, where there is a door with a built-in large seat.
With dimensions 1.10m x 1.08m and height 1.60m, it can be very comfortable to receive a chemical or nautical type toilet which is placed under the floor.

Through the console there is direct access to the back side of the instrument panel, from where we can inspect the electrical installation where strict order and safety prevail, being an example to be imitated.
It is worth noting that the inner surface of the door and the console, as well as all the internal surfaces of the boat, are coated with a «fur» from plastic fibers, which is applied by a special machine and beyond the aesthetics it gives, it also offers additional waterproofing at indoor spaces.

Between the console and the bow sundeck, a large free surface configure with dimensions of 1.45m x 0.60m provides complete freedom of movement.
The bow sundeck, measuring 1.60m in length and 1.28m in width, is located 22 centimetres lower than the upper surface of the tubes and can very easily be converted into a large double bed. Two individual lockers are formed under its cushions, the first of which accommodates the windlass of the anchor, which exits the bow entry under the tubes, while the second one, which is much larger, is a particularly comfortable and watertight storage area measuring 1.37m x 1.00m and a depth of 0.80m.

The helm seats are mounted on the back side of the two-seater bench that facing the stern, saving valuable space on the deck. They are equipped with a hydraulic suspension system, adjustable in height and have ideal distance from the steering wheel and the control panel, providing comfortable handling of the boat. They have such a design that they provide complete lateral support, effectively holding our body even in saddens manoeuvres or tight turns at high speed.

A large sofa can accommodate up to four people in the stern of the boat, located 68 centimetres away from the opposite two-seater bench, thus providing the appropriate space for table-laying among them. The sofa back to the back is the corresponding sundeck with dimensions of 1.70m x 0.75m.
The black-stained stainless steel rod is centrally positioned, making it a particularly stable holding point that facilitates our transition to the comfortable and unobstructed swimming platform.

Ergonomics, functionality, usability, safety, aesthetics are some of the basic features a boat has to offer.
Apart from our own personal experience, when listening to the users’ experience of the product then the result gets even better.
The Shearwater manufacturer, not staying stagnant in the evolution of things, has upgraded the quality of use of its Ribs by improving ergonomics based on anthropometry, while using different materials than usual has managed to present a set of high aesthetics:

Of course, in order to do all these, extra work, materials and passion are needed. But the result justifies the manufacturer’s efforts and satisfies even the most demanding user.

As highlighted in the introduction section, driving a Shearwater is always an enjoyable experience. So, with no second thoughts, I accepted the invitation of its manufacturer for a one-day trip to Tzia Island.
So, once again, I was standing behind the rib console, being unable to restrict my adrenaline, which had already started reaching out to dangerous levels in the sight of the perspective my eyes were facing.

I felt nicely and safely nestled in the comfortable bucket seat, which provided an ideal view to the amazingly designed console, while the windscreen was put on the appropriate height to allow for direct control of the bow.
I bent over, fastened the kill-cord around my thigh, and being unable to restrict the temptation, I violently pushed the throttle forward.
At that point I didn’t care about the measurements and the performance of Shear. I just wanted to enjoy the cruising virtues of its hull with all my senses.

Themis undertook throttlman duties, while I was tightly holding the steering wheel with both hands.
The rib was taking off from crest to crest, the throttlman was making sure that we bridged the waves playing a tough game with the control unit, while I was mainly focused on maintaining the appropriate relevance between the hull and the coming waves, instantly adjusting the trim in order to constantly obtain the desired riding angle of the rib.
Our speed was constantly over 45 knots and no one seemed willing to reduce its wild pacing.
We were actually living our own moments, in our own world!
It was as if we were chasing our adrenaline in an uneven race, steadily remaining in the second position.
We must have had covered the distance which separated us from Tzia island in record time. Only when we arrived under the lighthouse of the port did the throttle returned in place.

The ability of Shearwater to handle the intense waviness is unique and this is not only due to the deep V of its transom, but also due to its amazing flexibility and the prompt directivity that characterizes it, providing you with the potential to drive fast and engrave the sea at the points you choose.
And what the result is? Achieving of record time, not a single pounding, not a single water drop in the deck!

The wave’s height reached 1.5 meters coming on our port bow, we were two people on board and we were carrying 140 litters of fuel.
Without crackling or other disturbing noises, Shear’s hull was engraving the sea softly, demonstrating not only its robust construction but also the perfect fit of its lockers’ lids, which is sealed with both silicone rubbers and high-quality stainless steel latches.

After a wonderful three-hour relaxation and enjoyment of the brilliant sun at Vourkari, we returned to the sea for making our measurements.

At 4000 rpm we were travelling with 29 knots, consuming 1.37 litters per mile, numbers that allow us to arrive quickly, comfortably and economically on our destinations.

It is worth mentioning that from 3500 to 5000 rpm, for each 500 rpm the engine was raising up, we had a linear increase in speed by about 5 knots, while the fuel consumption increased steadily by 10 litters per hour. Of course, part of the reason lies in the low slips numbers achieved by Revolution propeller, which did not show any signs of ventilation even when we were trimming out at its limits.
At WOT, with enough persistence, we finally managed to break the 50-knots limit and record a top speed of 50.4 knots by taking all the engine rpm.

It is noteworthy that Shearwater was getting on plane in 3.5 seconds, reaching 30 knots at 7.2s and 40 knots at 11 seconds. These are very impressive numbers that we have rarely recorded, while it is characteristic that we could easily and directly reach the 45 knots, without making any special effort.

The above performance and the fact we were able to hit very near to the engine’s redline show that we had a very good set-up in our hands if we consider that our test Rib was without its normal loads as we got it suddenly from the boatyard without its upholstery and auxiliary engine installed.
Consequently, this is the lowest fuel consumption rates that our test Rib can record, but also the highest top speed that its owner will probably never have the chance to see again.

It is also known that the Shearwater manufacturer has tried endless hours of its craft, knows very well how to set it up, has experimented with every propeller and engine mounting height, thus delivering each Rib ideally rigged for the use is intended for.
This means that the owner gets the maximum performance from his boat without wasting time and money so as to achieve the perfect set-up.